You are here: Home / Locations / Dallas / A look at the untold story of the Dallas Cowboys cheerleaders 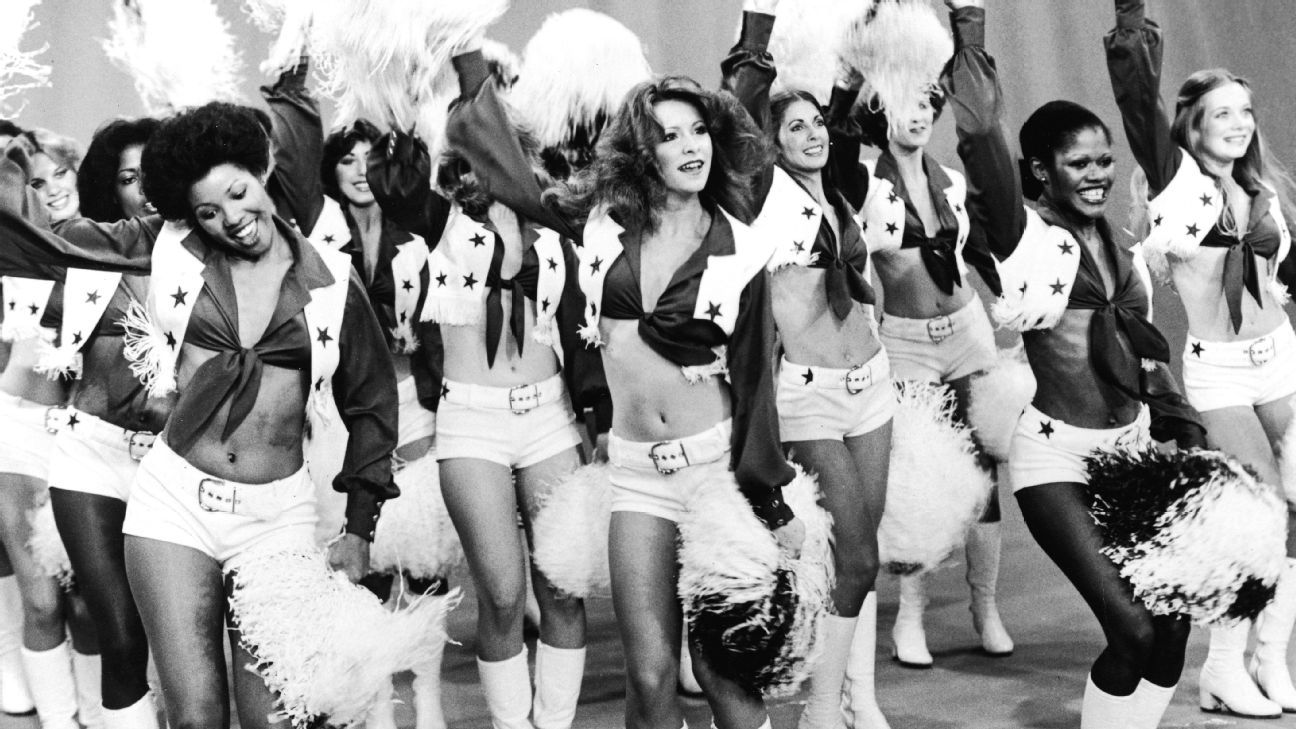 The Dallas Cowboys cheerleaders have long been documented by popular media, but for the first time, we’re hearing the voices of the women on the original squads. In the documentary film “Daughters of the Sexual Revolution: The Untold Story of the Dallas Cowboys Cheerleaders,” which premiered at the annual SXSW Conference & Festivals this past Sunday, director Dana Adam Shapiro chronicles the birth of the most iconic cheerleading team in the United States, a squad that helped rehabilitate the city of Dallas’ image from the site of John F. Kennedy’s assassination to the site of “America’s Team.”

“Here is something that’s so big, yet so misunderstood,” Shapiro said.

Shannon Baker Werthmann, Toni Washington and Dana Presley Killmer are among the many former cheerleaders who appear in the film. But emerging as the central character is the late Suzanne Mitchell, who started as general manager Tex Schramm’s secretary and was named director of the Dallas Cowboys Cheerleaders (DCC) in 1976. Shapiro and producer Carra Greenberg both described Mitchell’s ambition as akin to Peggy from AMC’s “Mad Men.” On the show, Peggy started as a secretary in the advertising agency and overcame the gender limitations of the late 1960s and early 1970s to eventually become copy chief. When Mitchell entered Schramm’s office for the first time before she became his secretary, and eventually director of the cheerleaders, he asked her what she wanted to do in five years. “I just looked at him and said, ‘Your chair’s pretty comfortable,'” she noted in the film.

It was the first squad of its kind, one that recognized the appetite of male audiences for beautiful women to present the game as more than mere sport, but also as entertainment, in conjunction with the “eventizing” of the NFL that was solidified by the success of “Monday Night Football,” which debuted on ABC in 1970.

As the only female executive with the Cowboys, Mitchell built the DCC to be ambassadors of the team, sending them to visit parentless children and war veterans and establishing a set of rules that limited personal behavior and made it clear that when they wore their uniform, these women didn’t just represent themselves — they represented the Cowboys. But even if her rules were limiting and at times fear-inducing, she was fiercely protective of the women she oversaw, and to this day, her legacy garners respect and admiration from many of her former squad members.

Alongside the Dallas teams of the 1970s and 1980s, featuring the likes of quarterback Roger Staubach and running back Tony Dorsett, the DCC helped put the Cowboys squarely in the national consciousness — aided by a forward-thinking general manager, the advent of televised football as entertainment and the efforts of Mitchell, a woman who would become one of the most important, yet one of the most overlooked, women in the NFL.

Along the way, the DCC were subject to scrutiny from both sides of the political aisle. Religious figures accused them of immorality because of their “revealing” uniforms — which consisted of a long-sleeved, royal blue crop top, a white, fringed vest, white shorts and tall, white boots — while a faction of emerging feminists criticized the women for exploiting themselves as sex objects. The iconic costumes are relatively tame to a modern eye and were recently part of a DCC collection donated to the Smithsonian.

Perhaps the hypocrisy in the moral judgment against them is best summed up by Candy Evans (pen name, Mary Candace Evans), author of “A Decade of Dreams: Dallas Cowboys Cheerleaders.” She noted in the film, “Dallas is a place where the sacred and the profane exist simultaneously, sometimes right across the street from one another.”

The era of second-wave feminism and the sexual revolution serves as the cultural backdrop for the advent of the Dallas Cowboys cheerleaders. The early 1970s in particular is a historical flash point for both movements. The Cowboys won their first Super Bowl in 1972 and Roe v. Wade, which confirmed the legality of a woman’s right to have an abortion under the Fourteenth Amendment of the Constitution, was affirmed in 1973.

The DDC became a symbol of female empowerment and sexual freedom. Courtesy of “Daughters of the Sexual Revolution”

At Super Bowl X in 1976, CBS made a concerted effort to feature the DCC on television in what would become known as “honey shots,” close-ups of the cheerleaders. “When one of those cheerleaders winked at the camera, the nation forgot there was a football game going on. This was really ‘the wink’ that launched the Dallas Cowboys cheerleaders,” Joe Nick Patoski, author of “The Dallas Cowboys: The Outrageous History of the Biggest, Loudest, Most Hated, Best Loved Football Team in America,” said in the film. One of the former cameramen for CBS was asked how he came up with the “honey shots” idea in the documentary, and he responded: “Because I am a dirty old man.”

It was a perfect storm for the DCC. There was clearly a mainstream audience for these women, all of whom were required by Mitchell to either hold other jobs, be in school or be married. In a time when women were finding their own paths to independence, these women weren’t just happy, but proud to be part of the squad, and they made a decided choice to join. Killmer, a member of the squad from 1981 to 1985, said she had already wanted to try out, but was particularly enthusiastic about the possible opportunity after being discouraged by her then-husband.

“I was a huge football fan, and specifically a Cowboys fan,” Killmer said. “I liked to dance, and I liked the Cowboys, so I thought I’d be a cheerleader. And I told my now ex-husband, my husband at the time, ‘I think I’m gonna audition for the Dallas Cowboys cheerleaders.’ And he said, ‘You’ll never make it.’ And that was all the motivation I needed. The minute he said I wouldn’t make it, I decided I was auditioning that year.”

When Killmer made the squad, her then-husband “tried to get me to gain weight. He tried to feed me calzones and stuff. Trying to make me fat so I’d get kicked off. He’s not part of my life anymore.”

Mitchell’s rules included innocuous restrictions such as no chewing gum and anti-infantilizing restrictions — “don’t talk like a baby!” — and others that were meant to protect both the women and the organization, such as a ban on dating players. But some rules seem demeaning, such as weight restrictions. The pressures of conforming to a certain body standard took a toll on some of the women.

It was also an era in the country when diuretics were regularly prescribed, when amphetamines were at its heyday in Hollywood, and when those extra seven pounds needed to be lost for the “sake of the camera.” For many of these women, it was simply part of what they signed up for. For others, it was utterly dehumanizing.

These issues demonstrate the conflicts of womanhood when worth is contingent on beauty and when beauty is continually redefined by the broader society. But in Werthmann, Washington, Killmer and Shapiro’s eyes, the adherence to such a standard was a choice — one that should be respected.

The early members of the Dallas Cowboys cheerleaders made a conscious choice to join the squad for $15 a game ($14.12 after taxes) and payment for ancillary appearances — $2,000 for USO tours, or $500 to appear at a mall with Spider-Man, for example. “I made about $10,000 a year being a cheerleader,” Killmer said, and that was in addition to their regular duties in their day jobs, as students, wives or mothers, as ambassadors for their city, their state and their country. Werthmann, Washington and Killmer each said that money was never the reason they wanted to become cheerleaders.

They also made a choice to work under Mitchell, who certainly ran a tight ship, in her own words from the film. Sometimes it was out of fear, if at times necessary. She was “mother, mentor, inventor, change agent and leader,” Killmer said.

Yet as Mitchell put forth certain restrictions, she also made it a point to assemble a squad that was both empathetic and inclusive.

As detailed in the documentary, she took a hard line in protecting her women after Playboy covers and pornographic spoofs such as “Debbie Does Dallas” led more fans to feel entitled to them and their bodies.

The DDC became pop-culture icons, even appearing on an episode of ABC’s “The Love Boat” in 1979. ABC Photo Archives/Getty Images

Mitchell hired a private detective after one cheerleader received a threatening set of knives wrapped in Pittsburgh Steelers-themed newspaper. She personally grabbed a pair of scissors out of the hand of one fan who tried to cut the hair of one of the cheerleaders.

“She came in with bruises once too often,” Mitchell said in the film, before alluding to making a phone call to someone to “take him out to the desert and tell him not to do that anymore.”

Mitchell also assembled a squad that was inclusive, particularly for its time. Killmer, Werthmann and Washington, who is black, all pointed to the relative diversity among the cheerleaders.

“That was a huge plus for Suzanne and for Tex Schramm — they were so inclusive,” Werthmann said. “And it got me out of my little bubble in Dallas, to meet all different kinds of people, all different kinds of women, and see that they’re all valuable. It was a great experience for me. I was the little WASP. So I didn’t have to leave Dallas to get out of my bubble — I just had to become a cheerleader.”

“I’m originally from Los Angeles, so when I came to Texas, I was very well made aware that I was black,” Washington said. “But then, when I became a cheerleader, I felt like I was back in California. I was just a cheerleader. You’re here, you’re part of the organization.”

What’s clear from speaking with Killmer, Washington, and Werthmann is that despite degrading headlines and backlash from contemporaries, Mitchell tried her best to make sure the women on the squad felt respected within the organization. According to several former cheerleaders, that all changed in 1989, when Jerry Jones bought the Cowboys from H.R. “Bum” Bright and brought in a new crop of team leaders. Mitchell described in the film having to kick out coaches from cheerleading practice because they would come in drunk just to gawk at the women. Cindy Villarreal, who was on the squad from 1988 to 1990, said in the film that she was asked to attend an appearance on a plane with Jones and his “business associates” in her uniform. “I didn’t feel that was proper,” she said. “To me it was demeaning. And it appeared that we were treated as bimbos. And I wasn’t a bimbo.”

“In my opinion, the respect for women was not there that had been in the past,” Werthmann said in the film. “I felt like we were just bodies for his entertainment.”

Four months after Jones took over, Mitchell left the Cowboys.

We’re still trying to come to terms with how our society treats women — whether it’s the current state of cheerleaders in the NFL or the current state of women in the workplace in general. We still don’t know quite how to answer murky questions of exploitation vs. empowerment — questions that are asked constantly of accomplished women who own their sexuality, from Serena Williams to Lindsey Vonn.

If there’s any lesson to be learned from this film, it’s that women can and should tell their own stories, even those we think we know, and we should be open to hearing them. “I think we’ve been telling it for so long,” Washington said. “You just have different ears.”

Contact TXTrendsetter to get listed here to target Texas Travelers.